The FastTrack is a trading tool neurally calculated and totally deparametrized: it provides reversal levels in both directions, for the next bar. It is a tactical tool that you may add to your arsenal, taking advantage of artificial intelligence.

On 2018/12/14, I’ve closed the free alpha testing of the FastTrack. It was fantastic! All the spxbot readers have seen in real time it’s performance.  Now, to be clear, the numbers.

Operations were simulated on a CFD platform. I have stopped the last (virtual) operation today (to complete this report) in the morning (CET), with the SPX at 2623. Prices subject to a bit of slippage and to personal triggers. This was not an automatic testing, it was, as usual, a real time testing. No account for expenses or taxation. Even if your apply your  more pessimistic view and consider a wider slippage, there is a huge margin for a very consistent profit.

This is the performance during the first month and a half, during development. Stellar! Now, development has completed, and subject to the refine process. Subscribers have access to daily reversal D-FT levels for the following markets:

The FastTrack basic assumptions are: 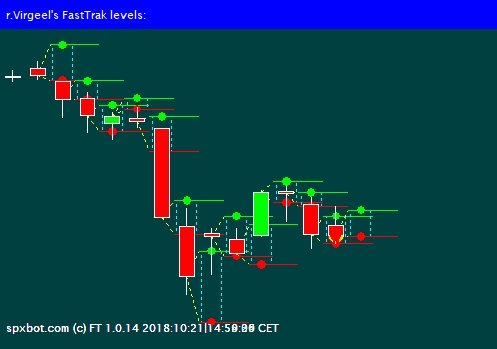 Here you see the levels for the latest days, from the top of Oct. 3rd to Oct. 19th., 2018
Levels are generated for the next day/bar. We can easily identify three key days, in the chart: 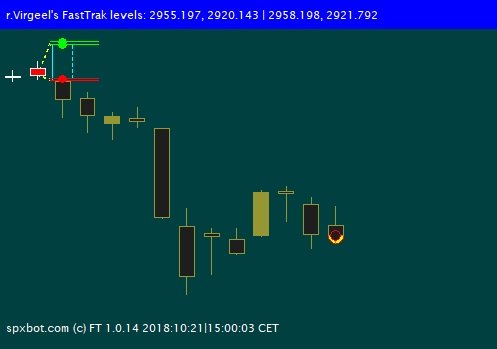 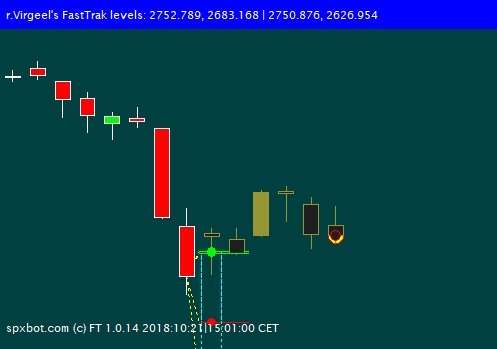 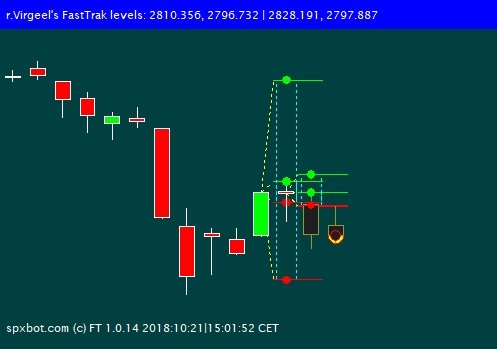 (Please note, the above images are from the very first development stage)

In the shown days, the coming reversals are clearly oulined by the relative levels: as next day the S&P 500 crosses the levels, then the reversal is confimed.

As shown in the last chart, for two consecutive days, the final FT supports and resistences are calculated under two different conditions and so we actually have two levels that mak the revesals of the incoming bar.

I have sampled the FT all around the data (it’s a nicely long recording of the S&P 500) and the behavior of the new indicator seems very attracting. The FT indicator is not exempt from some false signals, but following strictly its action should reduce drawdowns to virtually meaningless (as real time testing confirms).

The FT is also applied to weekly and monthly time frames, for SPX only. Follow the blog for updates.

How is the FastTrack built? r.Virgeel projects extreme levels into the coming bar. It makes a double projection, under two different (opposite?) conditions. His projections are usually quite precise and so the FT generate a sort of trend following channel. But the market is a wild beast and it is alive and loves to play sudden reversals. Let mr. Market play his game, and he will break the FT, either in the direction of the trend or reversing, because he is always exagerating and pushing over its limits. In some way, the FT is built around the psychopathological behaviour of the market. The FT has been suggested me by r.Virgeel and was unexpected. I mean, I did not designed it, I just refined the code to have a stable output.

Even if it has some occasional (and inevitable) false signal, the other r.Virgeel’s indicators are there to help confirm the market action.

The FastTrack has been published for free during the first month and a half of development, from late October to mid December 2018, during alpha development and testing, to let us evaluate it’s performance and solidity, and it is now available only  to subscribers. 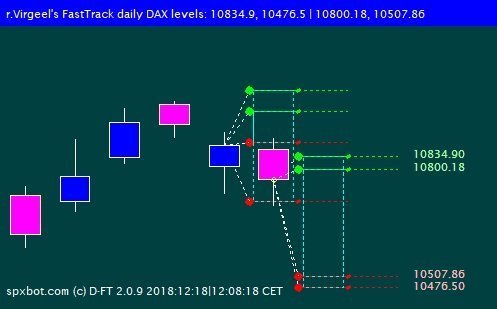 The final version of the D-FT is, at the moment, summarized in this image, from the new users’ page “FastTrack Board” (that shows the FT chart for every instrument available):  the reversal levels for the last two bars are charted to provide a visual feedback.

Thank you for following and supporting!